To Love and Protect?

It mortifies me that some humans can be so cruel. They take on a dog or cat, and at least cats retain much of their natural hunting/survival instincts, and then, when they decide they’re tired of it, or they can’t have a pet in their new apartment, or it’s just too much trouble, or (this is one of my favorites) they have a new baby, they put it out on the street. Maybe they drop it off in a neighborhood they’re convinced is the kind where “someone will take her in and give her a good home” or maybe they just drop her on the side of the highway – near the woods, perhaps, just sure “she’ll find food, and she’ll survive.” Unfortunately, most of these stories end very badly.

According to an article from The Animal Rescue Site, “Around 7 million dogs and cats enter shelters each year, about half of which are believed to be abandoned, and according to a study conducted by the National Council on Pet Population Study and Policy (NCPPSP), less than 2% of cats and only 15 to 20% of dogs are returned to their owners after arriving in shelters. These poor animals are at a higher risk of euthanasia, and often suffer from separation anxiety and other, similar issues. It’s hard to imagine what type of monsters would simply cast aside their animals, but sadly, it happens.”

This video from the site may shock you, but it certainly drives the point home: https://youtu.be/JMs7dkdO4YY

The article goes on to say, “While the majority of abandonment stories end badly (a sad but true reality), the capacity for love that many animal lovers show can also save the day. Sometimes a kind heart can overcome the most disgusting abuse.”

This came to be the story for a loving little Chihuahua/Rat Terrier mix now known as Winnie. Her owners decided to toss her out into a Brentwood, TN neighborhood. After a few weeks of wandering and nearly starving to death, her owners were found. Their response: “We don’t want her anymore.” This landed her in the Williamson County Animal Center and she was one of the lucky ones. Noah’s Ark Society pulled her from the center and put her in foster care. 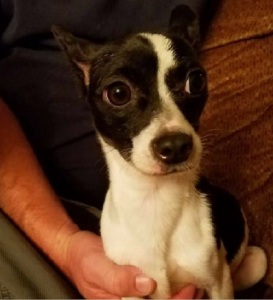 Now I am the lucky one. After 16 years together, I lost my Gracie almost two years ago. I was finally thinking it might be time for me to open my heart (and home) to a new “furever” friend, but I had no definite plan yet. While helping to foster this poor baby temporarily for her foster mother, well, you can guess the rest.

Please make this an opportunity to help spread the word about this abhorrent human behavior. PETS’ LIVES MATTER.

Jan Schim is a singer, a songwriter, a licensed body worker specializing in CranioSacral Therapy, and a teacher. She is an advocate for the ethical treatment of ALL animals and a volunteer with several animal advocacy organizations. She is also a staunch believer in the need to promote environmental responsibility.