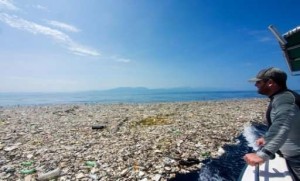 “Floating masses of garbage off some of the Caribbean’s pristine beaches offer grim evidence of a vast and growing problem of plastic waste heedlessly dumped in the ocean, local residents, activists and experts say. These “trash islands” have been captured in images by photographer Caroline Power, who lives on Honduran island of Roatan.” This, from Phys.org.

I know it’s depressing, but, people, we’ve got to talk about this. We have created a debacle probably much worse than any war – and in a VERY short time. This is something that is universally affecting us, all of us.

I met up with some old friends of mine recently. One friend is a Marine Biologist in Florida involved in Ocean studies. We got into a conversation about the plastic problem she is studying. She told me that they have found micro plastics in the bottom of the ocean. The bottom of the ocean! If you’ve seen the 60 Minutes exposé on plastic, then you are probably as mortified as I am. In that documentary, they talked about the introduction of plastic items into our lives. Commercials touting the wonders of plastic, which, by the way, (in case you don’t know) is a petroleum product, and stating excitedly that “it will last forever!” Yes, indeed it will. It is proving itself so. Obviously, no one considered the consequences of such a material and we have embraced it in nearly every aspect of our lives. 60 Minutes Overtime offers more.

Who remembers the 1967 movie The Graduate? The elder corporate guy at the party wrapped his arm around the shoulder of young Benjamin Braddock (Dustin Hoffman) and advised, “Plastics, son. Plastics.” Hmm…

According  to an article from National Geographic, “The Great Pacific Garbage Patch is a collection of marine debris in the North Pacific Ocean. Marine debris is litter that ends up in oceans, seas, and other large bodies of water. The Great Pacific Garbage Patch, also known as the Pacific trash vortex, spans waters from the West Coast of North America to Japan. The patch is actually comprised of the Western Garbage Patch, located near Japan, and the Eastern Garbage Patch, located between the U.S. states of Hawaii and California. These areas of spinning debris are linked together by the North Pacific Subtropical Convergence Zone, located a few hundred kilometers north of Hawaii. This convergence zone is where warm water from the South Pacific meets up with cooler water from the Arctic. The zone acts like a highway that moves debris from one patch to another.

While many different types of trash enter the ocean, plastics make up the majority of marine debris for two reasons. First, plastic’s durability, low cost, and malleability mean that it’s being used in more and more consumer and industrial products. Second, plastic goods do not biodegrade but instead, break down into smaller pieces. In the ocean, the sun breaks down these plastics into tinier and tinier pieces, a process known as photodegradation. Most of this debris comes from plastic bags, bottle caps, plastic water bottles, and Styrofoam cups.”

From Wikipedia: “It is estimated that approximately “100 million tons of plastic are generated [globally] each year”, and about 10% of that plastic ends up in the oceans. The United Nations Environmental Program recently estimated that “for every square mile of ocean”, there are about “46,000 pieces of plastic”. The small fibers of wood pulp found throughout the patch are “believed to originate from the thousands of tons of toilet paper flushed into the oceans daily”. The patch is believed to have increased “10-fold each decade” since 1945.”

“Akin to the Texas-size garbage patch in the Pacific, a massive trash vortex has formed from billion of bits of plastic congregating off North America’s Atlantic coast, researchers say. The newly described garbage patch sits hundreds of miles off the North American coast. Although its east-west span is unknown, the patch covers a region between 22 and 38 degrees north latitude—roughly the distance from Cuba to Virginia (see a U.S. map).

‘Many people have heard of the Great Pacific Garbage Patch,’ said Kara Lavender Law, an oceanographer at the Sea Education Association in Woods Hole, Massachusetts. ‘But this issue has essentially been ignored in the Atlantic.’

As with the Pacific garbage patch, plastic can circulate in this part of the Atlantic Ocean for years, posing health risks to fish, seabirds, and other marine animals that accidentally eat the litter.”

Many years ago, I read the 1976 novel Woman On The Edge of Time, by Marge Piercy. It is an intense commentary on many aspects of 70’s society as seen through the experiences of the book’s heroine who “communicates” with “a figure from the future.” I was struck when I read it, and, in my recollected words, I offer the thought that has stuck with me to you now; On one “visit” to this “figure’s” Utopian world, the heroine asks where they throw away their garbage. Perplexed by the idea, the reply is, “Throw away? How can you throw something away? The world is round.”

Jan is a singer, a songwriter, a licensed body worker specializing in CranioSacral Therapy, and a teacher.  She is an advocate for the ethical treatment of ALL animals and a volunteer with several animal advocacy organizations.  She is also a staunch believer in the need to promote environmental responsibility.