Hanukah: Lights in the Darkness 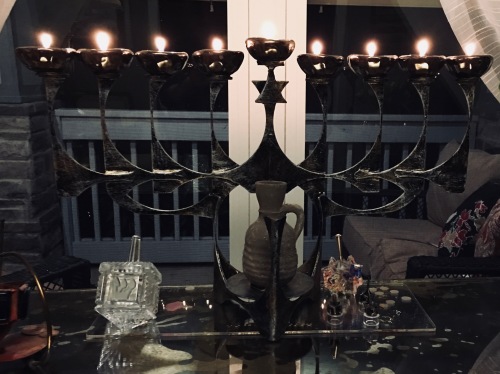 Hanukah begins in a week and this time of year I am always asked the same questions. “Do you also celebrate Christmas?” “Hanukah is the Jewish Christmas, right?” “So what is Hanukah about anyway?” “Do you also have a Christmas tree?” The list goes on. For the most part I’m always happy to share my traditions and practices and to educate folks about my tradition. So for the record, we do not celebrate Christmas, we don’t have a tree and Hanukah is not “Jewish” Christmas. In fact, Hanukah is a relatively minor festival that has little theological, religious significance. Hanukah celebrates both a military and a political victory.

The story takes place during the first century after the second Temple in Jerusalem was seized by the Greeks and desecrated, following which Judaism was outlawed. A small but mighty band of Jews, led by Judah HaMacabee (Judah the Hammer), liberated the Temple and cleansed it for rededication. In order to light the holy Menorah (candelabra) in the Temple, pure olive oil was required. The story goes that there was only enough oil found to last for one day, but it burned for eight while a new supply of fresh oil was prepared. And today, we commemorate what is considered a miracle by lighting our own menorahs one candle at a time for eight nights, each night adding a candle until the final, glorious night when the menorah is fully illuminated.

Because Hanukah is not a biblical holiday, the traditions and observances around it are varied. In Israel, the menorah is lit each night, foods fried in oil are eaten (think potato latkes and jelly donutes) and the traditional gift of money, or gelt in Yiddush, is exchanged. In America, families often add the giving of more secular gifts as the timing coincides of that higher profile, flashier holiday that happens to fall around the same time. You get what I’m talking about. And when my kids were young, we followed that practice. After all, we wanted them to enjoy being Jewish, to fit in with the greater culture and frankly, it was fun. As they grew older, we focused our Hanukah observance on socializing with friends, singing songs, and the gift giving has taken a back seat. To be honest, many American Jewish parents struggle with the annual “Hanukah dilemma.” How to help our kids appreciate and embrace their Jewish identity and not feel left out of the juggernaut that is Christmas. It isn’t easy.

For me the symbolism and imagery around Hanukah is rich and meaningful. I picture Judah and his warrior Macabees finding the Temple in ruins, remnants of their faith strewn about, in tatters. I can imagine the feeling of triumph and elation of victory as they reclaim what is theirs. I see them in the dimming light of the menorah frantically praying the oil lasts long enough for them to complete their work of cleansing and rededicating the Temple. And finally, the miracle occurs as the oil keeps on burning and the Macabees rejoice.

But there’s more. Hanukah usually occurs in December, the darkest of months. And yet, it is also called “The Festival of Lights.” We Jews have faced some very dark times in our history; destructions of our holy ancient Temples, the Spanish Inquisition, pogroms in Eastern Europe, the rise of Hitler and the Holocaust. These days increasing anti-Semitism both here in the U.S. and around the world have a lot of us feeling uneasy, wondering if another Holocaust could, in fact, happen. And of course, our people aren’t the only ones targeted by hate and bigotry. But during this darkest, coldest time of year we have only to remember the victory of the Macabees, and their small band of freedom fighters who kept the oil burning, for examples of bravery, perseverance and the will to survive. And there is nothing like the anticipation of watching the lights of the menorah grow, one night at a time, until that eighth beautiful night when all are lit. I think the most moving of all Hanukah traditions is the one that encourages us to display our menorahs in our front windows. It is as if the lights themselves burn defiantly and victoriously against all the generations of oppression and destruction to show the world that, even after the darkest of times, we are still here.

Barbara Dab is a small business owner, journalist, broadcast radio personality, producer and award-winning public relations consultant.  She is the proud owner of Nashville Pilates Company, a boutique Pilates studio in Nashville’s Wedgewood/Houston neighborhood.  Check it out at  www.nashvillepilatescompany.com.  She is also the creator of The Peretz Project: Stories from the Shoah: Next Generation.  The Peretz Project, named for her late father-in-law who was a Holocaust survivor, is collecting testimony from children of survivors.  Visit http://www.theperetzproject.com.  If you are, or someone you know is, the child of survivors of the Shoah, The Holocaust, and you would like to tell your story please leave a comment and Barbara will contact you.

Filed under History, Self Savvy, Uncategorized

2 responses to “Hanukah: Lights in the Darkness”