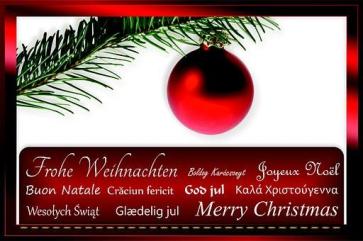 December is a difficult time of year for many people.  December can be especially lonely for soldiers who are far from home.  In 1914, lonely soldiers caused one of the most extraordinary Christmas events.  They (briefly) stopped the First World War.

The impromptu ceasefire began on December 7, 1914, when Pope Benedict XV suggested a temporary ceasefire so that the soldiers in the trenches could celebrate Christmas.  The governments of Britain, France and Germany refused to observe an official ceasefire.

It’s not clear why they said no, but there were probably two main reasons for refusing a ceasefire.  First, no one was tired of the war.  In December 1914, the war was only about five months old.  The major slaughters, like the Battle of the Somme when a million men were casualties, didn’t happen until 1916.

Second, and I think more importantly, the governments opposed a ceasefire out of fear.  Specifically, fear of fraternization.  Soldiers are better able to do their job of killing the enemy if they don’t know their enemy.  It’s why we demonize our opponents as a faceless “other” and use derogatory nicknames to dehumanize them.  If a soldier sees the enemy as human with a family and personal aspirations, it becomes difficult to shoot to kill.

Consider the line “from a distance, you look like my friend, even though we are at war.”  It’s taken from an anti-war song called “From a Distance.”  The song became popular during the First Persian Gulf War in the early 1990’s and it evokes a universal sentiment.

In 1914, the soldiers in the trenches ignored their governments and saw the enemy as a friend.  On Christmas Eve, they sang Christmas carols to each other across no-man’s land.  On Christmas Day, they crossed no-man’s land to exchange food and talk of their families back home.  In one instance, they played a game of football (i.e., soccer).

After Christmas, some of the soldiers decided they couldn’t return to war.  One anecdote says that some French and German soldiers refused to fight each other.  Their commanders threatened them with all sorts of disciplinary action to no avail.  Eventually, the affected French and German units were pulled out of their trenches and sent to fight in other sectors.

The Christmas Truce of 1914 has never been repeated.  As wars continue around the world, that is one of the saddest commentaries on this holiday season.