The Big 6-0 And Other Surprises 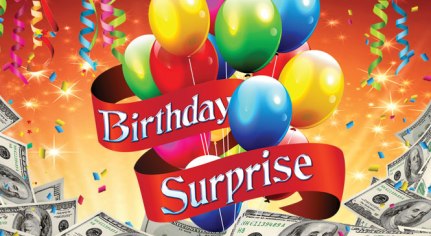 No, it’s not me turning 60 (though that will come soon enough), it was my husband who just hit this milestone birthday. And as is his way, he had no idea how to celebrate or commemorate the occasion. After some thought he finally decided he’d like to just go out with me to a fabulous steak dinner. Nothing else. No parties, no fancy gifts, no trips, nothing. I think this had more to do with his ambivalence toward the birthday than anything else. And I see his point. Sixty sounds considerably older than 59 or anything that came before. It sounds, dare I say it, like middle age is finally in the past. But I am a big believer that age is a state of mind, and that aging is a subtle process that transcends the calendar. And I really wanted my love to be able to celebrate the man he has become and to look forward rather than backward. And so began the plans for…THE BIRTHDAY SURPRISE.

I have known my husband through 42 birthdays. You read that right. The first birthday we celebrated was his 18th, during our freshman year of college. I have attempted to surprise him many times and always, always, he has figured it out. This time, I concocted what I believed to be the perfect birthday surprise. I worked with our three adult children to bring them all home for a weekend to celebrate him. Three cross country flights, three different cities, three jobs. It seems straightforward and yet there were challenges.

I managed to coordinate the flights so two arrived around the same time, one a bit earlier. I signed us up for dinner and a speaker at our synagogue in order to get us out of the house on the appointed night of arrival. I told very, very, very few people about my plan. I lied my way through questions about the weekend, including coming up with fake plans. And, last week my brother decided to come for an overlapping visit, which turned out to be a great red herring. At the last minute my son set off our home security alarm resulting in a panicked phone call and more lies from me about the porch door blowing open and our neighbor coming to the rescue. Finally we were on our way home. After we parked the car in the garage, I blew past my husband up the stairs. The house was dark. The kids were sitting silently on the sofa. My husband followed me into the house, let the dog out, and when he turned around on went the lights. The look on his face was priceless! He was truly stunned. The kids gathered him into a group hug singing Happy Birthday. We did it!

The rest of the weekend passed with lots of catching up, laughter and of course, food. It was magical and I believe my husband was actually surprised. It was a quick trip, but one I know we’ll all remember. Monday morning the first thing my husband did was thank me. He said that even though he’s used to the kids not being here, he realized how much he misses them and how happy he is when he’s with them. He felt grateful they would drop their lives to come for his birthday. This man has made endless sacrifices of time and energy; he is the rock of our family. Our children know they are the lucky ones. They know they are loved unconditionally and valued beyond measure by their father. To them, it was an honor and a privilege to be able to come celebrate. Every single one thanked me for bringing them home. And I can add my gratitude to theirs. I am grateful for the 42 birthdays we’ve spent together; I look forward to many more. And I still can’t believe we pulled off the surprise of a lifetime.

Barbara Dab is a small business owner, journalist, broadcast radio personality, producer and award-winning public relations consultant.  She is the proud owner of Nashville Pilates Company, a boutique Pilates studio in Nashville’s Wedgewood/Houston neighborhood.  Check it out at  www.nashvillepilatescompany.com.  She is also the creator of The Peretz Project: Stories from the Shoah: Next Generation.  The Peretz Project, named for her late father-in-law who was a Holocaust survivor, is collecting testimony from children of survivors.  Visit http://www.theperetzproject.com.  If you are, or someone you know is, the child of survivors of the Shoah, The Holocaust, and you would like to tell your story please leave a comment and Barbara will contact you.

One response to “The Big 6-0 And Other Surprises  ”