Rebel With A Cause 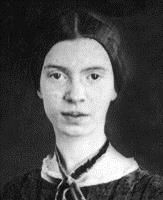 Emily Dickinson was a rebel. She’s an excellent role model for any woman (or man) who wants to demur from the mainstream but not be handled with chains, to paraphrase one of her more famous poems.

Her rebellion was unobtrusive, quiet, and almost invisible at first viewing. Consider her poetry; She wrote poetry that often did not rhyme. The convention in her day was that poems consisted of four-line stanzas in which alternating lines rhymed.  Her style was so radical that it was rejected by one of the leading poets of the day. The rejection must have crushed Emily because she never again submitted a poem for criticism or publication and her poetry was first published after her death. Now her non-rhyming style serves as a  transition to the free-form style prevalent with today’s poets.

Her poetry memorializes her rebellion against the constrictions in her life. One widely  anthologized poem begins with an observation (paraphrasing again) that people who fight silently are braver than those who fight openly as soldiers. This sentiment will resonate with anyone who has fought an up-hill battle against oppressive authority or stupid social conventions.

Emily rebelled by using satire in her poetry. Her satirical eye was as sharp as Jane’s Austen’s, but perhaps not as gentle. One of her poems pokes fun at a preacher who preached so long on a broad topic that he made it narrow. We all love to skewer pontificating bores, but we rarely do so as elegantly as Emily.

Emily was also a rebel in her personal life. At a time when marriage and motherhood was the only socially acceptable career for women she remained unmarried. She carved out an unofficial career as a poet.

I discovered the rebellious life of Emily Dickinson when I began reading my copy of her collected poems, bought long ago and forgotten on the shelf. I never realized how radical she was when I was forced to read her poetry in English literature class. Now I want to become a rebel like Emily Dickinson.

Norma Shirk helps employers create human resources policies for their employees and employee benefit programs that are appropriate to the employer’s size and budget. The goal is to have structure without bureaucracy.

4 responses to “Rebel With A Cause”