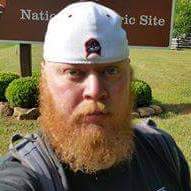 He stood 6’3” with the build of a football defensive lineman.  When his blond hair thinned, he shaved his head but kept his untrimmed beard. He looked scary as heck.

But Big Mike wasn’t scary to little kids. Every child, and most adults, stood in line for his bear hugs and to hear his deep laugh. He taught his nieces to roar like a dinosaur. They put bows in his beard and pasted one on top of his bald head.

Nothing was too wacky or weird to try at least once. At the Honda dealership where he worked, he flew toy helicopters around the shop often trailing a small banner with an obscene message.

At his friend’s wedding, he told the bride’s family that he and the groom were drug dealers. When his friend’s son was born with blond hair and blue eyes, Mike responded, “Hey, I was just there to fix the dryer”.  (The baby’s parents have dark hair and eyes. )

His voicemail greeting growled “Hi, this is Big Mike. I like girls, so if you’re a guy make it quick”.  His Facebook page said “Hi, I’m Big Mike. If you want to know more, get to know me in person”.  So many people got to know him.

The children at summer camp will never forget the big guy who was always willing to listen to their troubles and dreams.  The Special Olympics athletes he cheered to victory presented his family with a medal engraved with their names to honor Big Mike.   He was a PUNK (Professional Uncle No Kids).

Big Mike was a talented artist. He sketched with pencil and pen. He built rocking chairs shaped like animals for children.  He customized his shoes with glittery designs, like the pair he wore at the bowling alley with a battery-powered blinking blue light. He also played several musical instruments and happily taught others to play.

It’s impossible to explain who he was or how much he influenced others in a few words. He certainly wasn’t perfect because no human is. But I have never laughed so much at a funeral as when I listened to his friends and family tell stories about him.  He was taken from us too soon. But his legacy will live on through the stories.

My company, Corporate Compliance Risk Advisor, helps employers (with up to 50 employees) to create human resources policies and employee benefit programs that are appropriate to the employer’s size and budget. The goal is to help small companies grow by creating the necessary back office administrative structure while avoiding the dead weight of a bureaucracy.  To read my musings on the wacky world of human resources, see the HR Compliance Jungle (www.hrcompliancejungle.com) which alternates on Wednesday mornings with my new history blog, History By Norma, (available at http://www.normashirk.com). To read my musings on a variety of topics, see my posts on Her Savvy (www.hersavvy.com).