Havana: A City Caught in The Past But Looking Toward the Future

We recently spent two days in Havana, Cuba as part of a Caribbean cruise. As children who grew up in the 1960s and 70s, my husband and I know nothing of a world in which the tiny island was a hub of glamour, music, beauty, and of course, The Mob. So we were intrigued, and yet a little uneasy, to visit what is today a Communist country that is a mere shadow of it’s former self.

We began our visit with a lengthy wait on the ship to disembark. The line of cruise passengers snaked through the ship, down the gangplank and into the terminal. After making our way through immigration, passport control and security, we stepped out into the blazing sun, unsure of where to head first. We had scheduled our guided tour for the next day and planned to spend this first day exploring on our own.

We crossed to the square across from the terminal, narrow streets falling away in different directions. We headed off down one of them, following the crowd. As we wandered some people checked us out, some ignored us, several people approached as we walked asking if we needed directions or wanted to book a tour or hire a taxi. Skeptical American tourists that we are, we tried to put them off and keep walking. After awhile it became clear that for these folks, cut off for decades from the U.S., seeing Americans on their streets is a curiosity. They want to engage in conversation, to learn about the world beyond their island.

During this first day, the sights, sounds, smells, were overwhelming. We’ve traveled to many countries, but nothing prepared us for this. Havana’s decay is stunning. Once beautiful colonial buildings barely hang onto life as makeshift homes and shops. The cobblestone streets can rise up at any time, so it’s important to have a steady foot and sturdy shoes.

The most famous attraction of Havana is, of course, the cars. Those relics from the 1950s are everywhere! Some have been beautifully restored and serve as government run taxicabs and cars for hire. Some are simply held together by screw drivers and duct tape and are privately owned cars that also serve as makeshift taxis.

As we explored, the sky turned dark, the air thick with humidity and of course, it began to rain. We saw cabbies run to cover their cars, scrambling to put the tops up on the convertibles. We ran for a local hotel and headed for the bar. This particular hotel is part of a European chain, part of the burgeoning partnerships between the government and the private sector. After enjoying a Cuban beer and listening to some music, the rain finally let up and we headed back to the ship to get ready for our evening.

After freshening up and relaxing a bit, we made our way off the ship, again through immigrations, passport control and security; though this time it didn’t take but a few minutes. We found a cab, a more modern car, which took us speeding along the coast to the Hotel Nacional de Cuba, where we had reservations to see the Cabaret Parisien show. During the drive, we were surprised to see hoards of people hanging out along the sea wall, relaxing, talking, drinking.

The hotel sits atop a hill overlooking the ocean. It is one of the few buildings we saw that first day that has been restored and maintained. After we were dropped off, we entered the lobby and walked through the doors to the outside grounds. The patio was alive with people having a drink at the outside bar, wandering the gardens and listening to a strolling mariachi-style band. Overlooking the cliffs, off in the distance, a rainbow began appearing, creating a beautiful photo op. 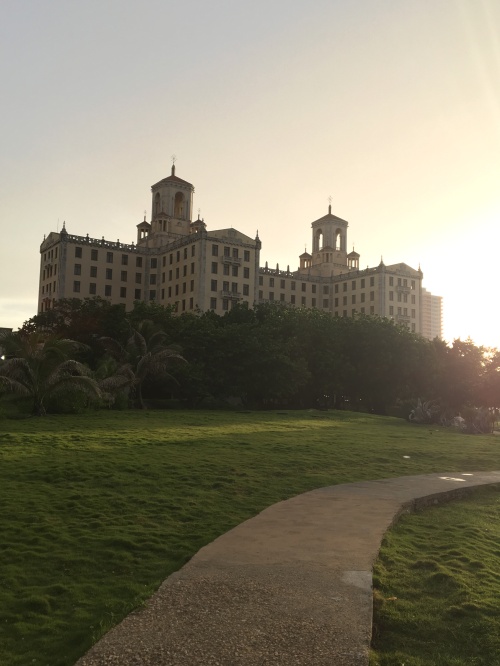 That evening’s cabaret show was a feast of sights and sounds as performers wove a story of Cuba’s cultural history. Our small table was right next to the stage so we didn’t miss a thing. It is worth noting that the food, although adequate, was pretty much what we had heard about government-run restaurants: bland and uninteresting. This is due to a lack of spices, herbs and fresh vegetables, which are expensive and in short supply. But the Mojitos were great!

Day two, we were up and out early and made our way to the hotel where we were to meet our tour. Our guide was a young woman named Sady. She explained the day’s events, which would include a walking tour of Old Havana while she educated us on the city’s history and architecture. Of course no tour of Havana is complete without stopping at La Floridita, the bar frequented by Ernest Hemingway where he would enjoy the traditional Daiquiri.

Midday, we stopped for lunch at the home of one of Sady’s friends. This is a privately owned Palidore. These establishments are popping up throughout Havana as families try to supplement their meager government incomes. Some families, as was the case here, also rent rooms in their homes. We made our way up four rickety flights of stairs to the rooftop. There, under a gazebo and surrounded by mint bushes, was a table set for our group. We happily gathered around the table to relax, drink some ice-cold water and relax. We watched as our hosts snipped sprigs of fresh mint to make mojitos, while enjoying a 360 degree view of Havana. 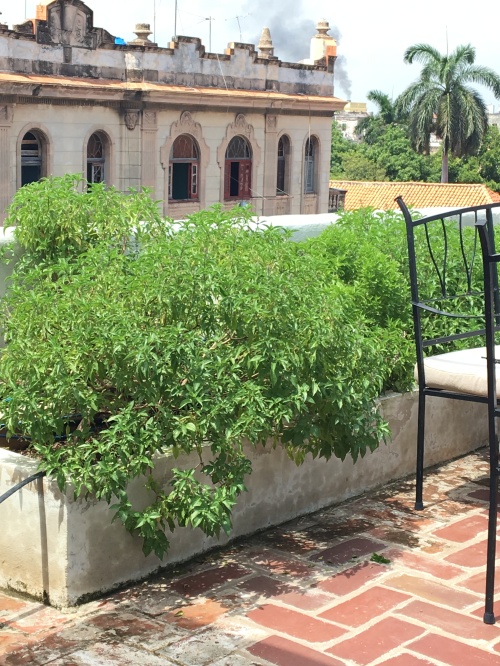 Lunch that day was a delicious feast of chicken, fish, fresh vegetables, fruit, potatoes and flan for dessert. Although government run restaurants offer up bland, colorless food, this family-run establishment featured the best of traditional Cuban cooking. The herbs are all grown in their garden and there was no lacking for spice and flavor. The meal was prepared and served by the family. 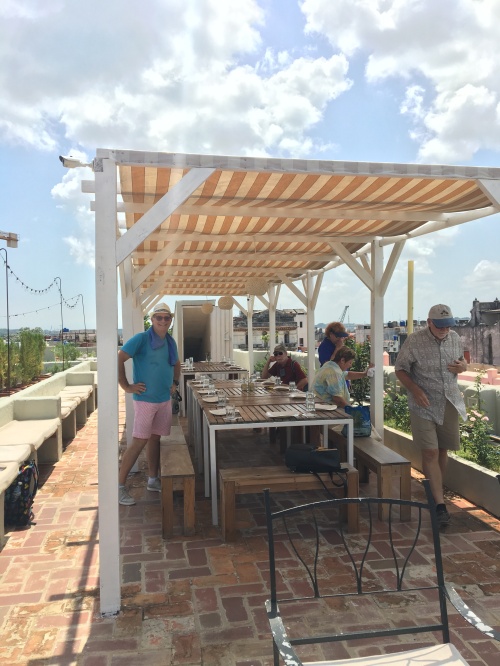 Following lunch, we headed out for a ride in the cars! We chose the 1956 Chevy Bel Air convertible, newly restored, red with white leather interior. Off we went, with our driver winding us down the coast away from Old Havana, toward memorials to Che Guevara and Fidel Castro, through the neighborhoods where stately old homes abandoned by their owners during the revolution now stand as embassies, and through the Havana Forest.

Our driving tour ended back at the Hotel Nacional where we gathered in the Mob Bar to relax and enjoy more Mojitos!

During the course of our tour, I had the opportunity to talk to our guide about her life, her political views and her plans for the future. She lives with her mother and her boyfriend, has a Bachelor’s degree in psychology and is currently studying for her MA in Sexology and Emotional IQ. When I asked what she plans to do once she finishes her degree she told me she wasn’t sure, but since the education is free, she wanted to study what was interesting to her. She also explained that the banks do not extend credit so people generally don’t have bank accounts and cannot own a home or a car since everything must be purchased in cash. I asked if she is able to travel beyond Cuba. She explained that while Cubans are technically allowed to travel, they must pay hefty fees to apply for a visa with no assurance they will be granted one. Most people don’t even bother since those fees are nonrefundable. We discussed the current American political scene and she said people in Cuba are worried about the new administration’s plans to roll back the advances made by the Obama administration to encourage tourism.

As we approached the memorial to Che Guevara and Fidel Castro I asked her what people in her generation think about the future. She said most are not members of the Communist party and believe things will change. “Communism is an interesting philosophy,” she said, “but it doesn’t work in the real world.” It has been reported that Raul Castro will retire in two years and, with no immediate successor from his family, it’s unclear who or what is on the horizon for the Cuban people.

My visit to Havana has stayed with me and I hope someday to return and see more of the countryside. I am still processing the trip, though it’s been several weeks since our return. With an uncertain future, both inside the country and between our two governments, one thing is sure: the basic curiosity to know about those different from ourselves, and the desire to find common ground. Even those living under a regime, effectively captive on their island, have dreams, thirst for knowledge, the desire to improve the world around them, hope and love for their families. 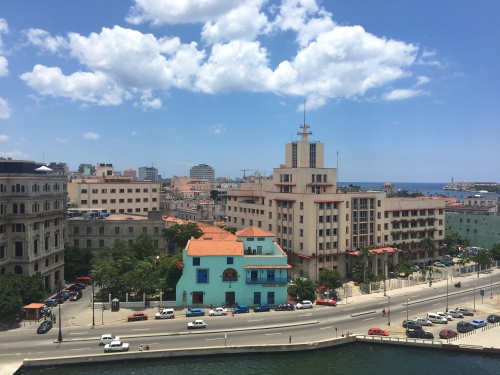 Barbara Dab is a journalist, broadcast radio personality, producer and award-winning public relations consultant.  She is the proud owner of Nashville Pilates Company, a boutique Pilates studio in Nashville’s Wedgewood/Houston neighborhood.  Check it out at  www.nashvillepilatescompany.com.  She is also the creator of The Peretz Project: Stories from the Shoah: Next Generation.  The Peretz Project, named for her late father-in-law who was a Holocaust survivor, is collecting testimony from children of survivors.  Visit http://www.theperetzproject.com.  If you are, or someone you know is, the child of survivors of the Shoah, The Holocaust, and you would like to tell your story please leave a comment and Barbara will contact you.

2 responses to “Havana: A City Caught in The Past But Looking Toward the Future”